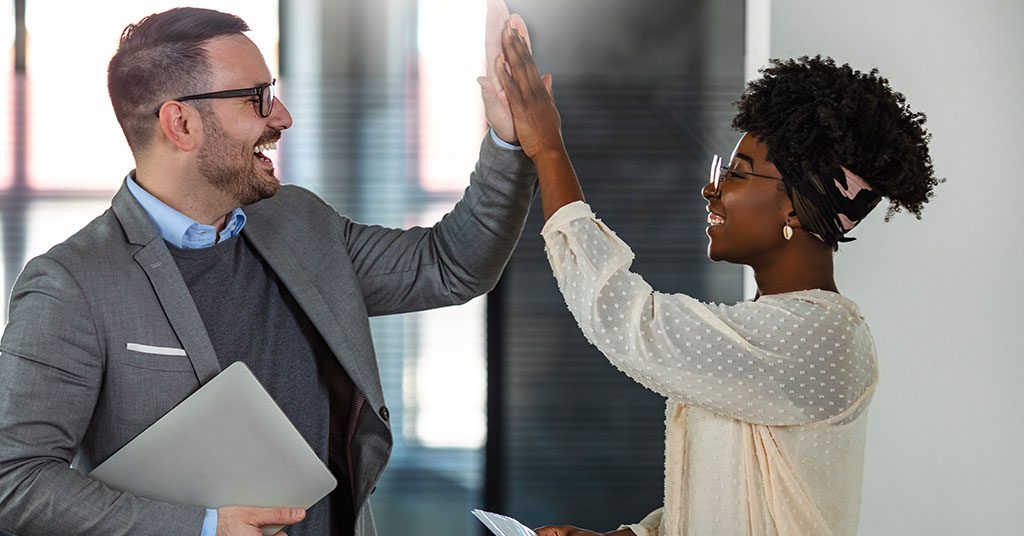 The outcome of this article is something you can take action on. It is proven to drive team motivation.

At my Agency, it’s something I’m enacting with the team. Almost as a ‘theme.’

The best part, it is something so simple. And it’s very impactful, and something you’re very familiar with doing.

You know by the title of this blog, that I am referring to the high-five.

It’s simple but powerful and when done consistently, good things will happen. Let me demonstrate.

In one of my favorite podcasts, The Ed Mylett Show, he interviewed author Mel Robbins. I loved this episode so much that I listened to it four or five times, taking new notes each time.

One of the things that Mel talks about, and is the title of her book, is The High 5 Habit.

It’s nearly impossible, both physically and mentally, to have negative thoughts when you are giving a high-five.

Think about it. When do we give high-fives?

Take football: College, NFL, even Little League. When something good happens, what do we do?

Not even people we know, total strangers a lot of times… we throw our hand up and high-five everyone around.

Another example is babies. One of the first things that we teach a baby is the high-five. They giggle, and you laugh. You get excited, they get excited.

You have wired in your brain, a lifetime of positive thoughts, feelings, and emotions around high-fives. Only good things happen with high-fives.

The physical motion of raising your hand and giving somebody a high-five is tied to this positive programming. And suddenly, you’re happier, you’re in a better mood, you’re in a positive mental state.

We know our productivity levels in all areas of life. Our creativity levels go through the roof when our brain is positive. A few studies were done on this.

One was on NBA teams.

For the study, over a period of years, they studied team motivation in the preseason and they counted how many times they saw a high-five, a fist bump, a pat on the back – something positive.

They tracked, in the preseason, how many times this happened.

And then they followed the teams all season long and without exception, the teams that gave the most high-fives, fist bumps, and pats on the back, did the best overall in the season.

What happened early on in the preseason with these teams building trust, and creating positivity within the team had a direct impact on their performance results.

I have one more study example.

This study researched children. The researchers asked, what’s the most effective way to motivate kids?

They took three groups of children and put them in separate rooms and they gave them challenging tasks to complete.

With the first group, before the completion of the tasks, the researchers said phrases to the children such as, “you are so smart,” “you are so awesome,” and “I believe in you.”

With group number two, phrases like “your perseverance is so high,” “you are such a hard worker,” and “you got this,” were used. This group worked a little bit better at the tasks than the first group.

In the third group, the researchers didn’t go in and say anything. They just went in, observed the room, and gave the kids high-fives.

The outcome wasn’t even close. The group that performed exceptionally well, and better than the other two groups was the group that got the high-fives.

With a high-five, it’s like a basic need is fulfilled. We’re seen. We’re understood and we are celebrated when we get high-fives.

Mel continued in the podcast to say we need to be high-fiving ourselves for what we see in the mirror.

She explains that it’s different for everyone. Some people don’t see their true selves and some people see the worst version of themselves in the mirror.

We have to reprogram. Because every time you look in the mirror, before you leave that mirror, raise your hand, and give yourself a high-five.

Sounds corny, but it works and there is strong science behind it. You have to affirm to yourself that you are seen.

So, bringing this back to the Agency. As a team, we track so many things. How many Autos do we write? And Fire, Life, and Health. How many quotes and calls do we process? We have production goals and other goals, too.

I ask my team to commit to celebrating each other. High-fives all day every day. Our team motivation is benefitting. The high-five habit goes a long way.

So how many high-fives can you give?