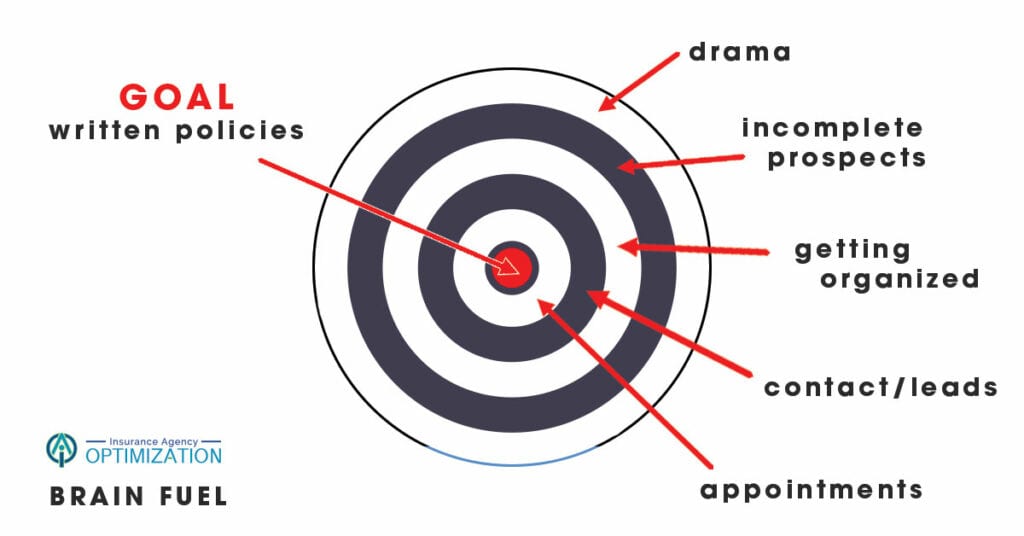 You want to write more policies. Who doesn’t!?

But the human brain can only concentrate on ONE thing at a time. Here’s an illustration and how this can impact productivity in the insurance world.

Looking at our bullseye graphic you’ll see 6 rings which represent the areas of focus insurance producers have in their life. Remember… we can only focus on ONE thing at a time and success is a mind game.

If all we do is focus on DRAMA (family/friend issues, financial issues, company/industry issues, politics, etc) then we are unable to be highly productive in much of anything. We all know these people, they are addicted to DRAMA, about any and every issue imaginable and usually, other people can’t wait to get away from them! But being honest, we all can get sucked into this ring from time to time. It’s just important to realize we are there and get out ASAP. If we stay in this ring we’ll NEVER hit the bullseye.

The second and third rings shown are INCOMPLETE PROSPECTS or TASKS and GETTING ORGANIZED.

These rings represent when we get out our pens and pads and start creating To-do lists: I need to do laundry, pick up my kids from school, follow up with past prospects, get to the gym, reply to old e-mails, submit follow-up paperwork etc.

What happens is we end up with lists that have some good stuff, but if we are being real, mainly nonsense. Most of the items listed on our “to-do lists” are LAGGING indicators of success, not LEADING indicators. They are action items to close out business and not bring in new business. This is known as the “rocking chair syndrome”: You are moving a lot, but you aren’t going anywhere. Sound familiar?

Ever have a day where you are super busy, but never actually move closer to where you really need to be? That’s because you’re stuck in these second & third rings. Unfortunately, the second & third rings will trick you into believing you’re swamped, but the reality is, nothing you are doing is “income-producing.”

Now it hits you that you need to move the needle forward, you need to start performing income-producing activities. So, you time block an hour to make calls to CONTACTS. For one hour, you focus on making calls and you get through it. Maybe you even made 30 calls during that one hour. But here is the problem…if your focus is simply on MAKING calls, all you do is MAKE calls and then you’re done.

However, just because you MADE calls doesn’t mean you were productive. It doesn’t mean you made sales, or scheduled appointments or even got anybody to move one step closer to writing a policy.

No, instead all you did was focused on making calls. I hear from Agents all of the time who say they REQUIRE THEIR TEAM TO MAKE 100 CALLS EACH DAY…MINIMUM! Simple math tells me that’s 500 calls each week. These same Agents tell me their team isn’t producing. My response is “What the heck are they saying?” If they are making 500 calls a week and not selling anything are they literally telling people to NOT buy insurance??? Again, the problem is their focus is on simply MAKING the calls, so that’s all they do. So that should never be the goal.

The other part of ring four is LEADS. People become obsessed with having “LEADS.” They trick themselves into believing that they always have HOT leads. Perhaps it’s a high wealth client or business owner with endless premium and policies, or the daughter who just inherited tons of money and needs millions of dollars worth of life insurance. I hear all of these stories about leads, but if we are being honest here, leads don’t have much value. The people themselves have value, but the reality is most leads don’t close.

Simple math tells me that if I buy 100 leads online, about 5 will close and 95 won’t. The bottom line is we can’t tie up our success or have our focus on LEADS because leads are actually very easy to get – you can just go online and buy them. But LEADS aren’t what you really want.

What is it that we REALLY want?

The next ring brings us the closest to our goal…APPOINTMENTS. You have to focus on APPOINTMENTS!

If you want to hit the BULLSEYE – AND THAT WOULD BE YOU WRITE MORE POLICIES – you have to control your FOCUS. If you focus on drama, busy work, meaningless calls and overvalued leads, you get more of each. But when you have a laser-like focus on setting appointments, every conversation will lead you to set more appointments.

It’s pretty tough to sell ANYTHING, but especially insurance if you don’t hold appointments.

The human brain can only focus on one thing at a time. If you want your insurance agency’s production to significantly increase, make the focus for your team be around APPOINTMENT SETTING.